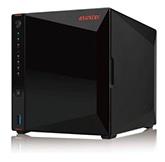 This fourbay NAS is popular choice for businesses, not just home users. Powered by a quick quadcore Intel Celeron J4105 supported by up to 8GB of RAM, the AS5304T is supposed to be quick even when running over a standard gigabit ethernet network. It has space for four drives and supports a wealth of RAID configurations. There is also an HDMI port on the back allowing you to use it as a Linux desktop PC. It also comes with a hefty 92mm fan, which works with heatsinks on the major components to keep the heat under control. You can set up users and shared folders as you would on any other NAS, or set up iSCSI targets for virtualisation purposes. Asustor still provides tools for sync with OneDrive, Dropbox and Google Drive, or backing up Windows and macOS PCs. With the Brtfs file system, one can even use snapshots and the Snapshot Center app to safeguard the data on the NAS. asustor.com