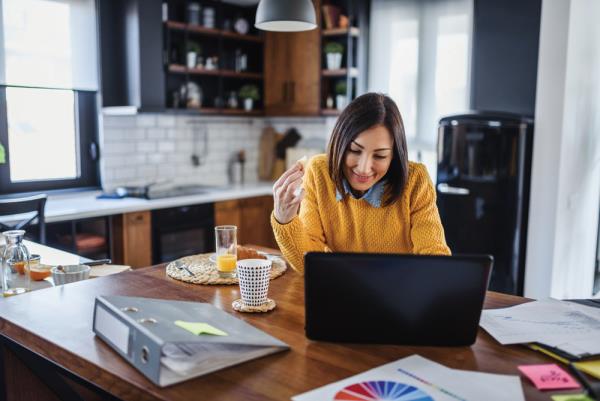 It was March 16 last year when Matt Hancock, the health and social care secretary told the House of Commons that “unnecessary social contact” should be avoided as the UK experienced an exponential rise in coronavirus cases. Later that day, prime minister Boris Johnson announced this “very draconian measure” in a televised statement. Then a week later, Johnson’s ‘stay at home’ mantra was the harbinger for the rest of the working year.

Working from home is something many of us – me included – have either wanted or had enjoyed doing already, so knowing that we didn’t have to sit in traffic jam or stand underneath someone’s pungent armpit on the tube any time soon, was a game-changer.

Are enterprises in a better position for remote working now than they were during the first lockdown?

“From a cloud perspective absolutely. More cloud solutions are easily available; multi-cloud, hybrid cloud; public, private and bare metal options,” says Hiren Parekh, UK head of OVHcloud. “In the past many organisations only saw public cloud as the go-to which was quite inhibitive due to cost and vendor lock-in. Traditionally it’s difficult to move legacy apps to the cloud. Now there is freedom of choice and better pricing models. Legacy apps can now easily be moved through Hosted Private Cloud. High performance connectivity is also more readily available than in the past, so much so that cloud apps and the workforce can be ubiquitous as connectivity moves away from the bottleneck single access point of the office.”

“At the time of the first lockdown there was a lot of uncertainty surrounding which of the many solutions on the market would be the best fit for companies,” says Ben Kearns, head of sales at telecom 24 Seven Cloud. The UK telecoms and IT marketplace have innovated new solutions and rolled out products at an incredible pace. As a result, the solutions out there today are far superior to those available even a few months ago. Nearly 12 months later we can safely say that two clear front-runners have emerged - Zoom and Microsoft Teams.”

It’s a view shared by Richard May, managing director at virtualDCS, who says that  there was initially a shortage of physical equipment, including laptops, headsets and even cameras, which meant that it was challenging for many organisations to be able to offer remote working facilities to their employees.

“I think businesses are more prepared than they were during the first and second lockdowns and working from home has almost become the new norm for many,” May adds. “Employees are far more mentally and physically equipped than before and are used to the technology now. They’ve adapted to the world of Zoom and Microsoft Teams, and are now used to conducting business in this new way, but many still have a long way to go as companies still struggle to answer phones and manage their distributed workers.”

For May and his colleagues at virtualDCS, “Microsoft Teams has proven to be the most important tool for providing secure connectivity between our staff members, and with our recent telephony integration, the outside world as well. Our file sharing service Nimbox has also been essential for distributing internal data securely between employees”.

That’s not to say it’s all been plain-sailing, as May’s team does have moments where technology isn’t quite offering what it promises. “We’ve seen frequent episodes of poor latency and video quality, but it’s often hard to work out if it’s the internet connection or the cloud service provider that is causing the issue and struggling to keep up with the increased demands of home working,” he adds.

However, you could argue that was to be expected, especially when one considers the speed in which companies the length and breadth of the British Isles had to adapt to the biggest change to the working week it had ever experienced. So, what do the internet providers think of it all?

It’s clear that enterprises are adapting and working as well as they can with the new way of working, but people still need to adapt to the technology in a different environment – working from home isn’t just about not commuting.

“The biggest learning curve with technology is typically working out how to use that technology,” Kearns continues. “As technology evolves and adds new features it can often become more difficult to start using that technology without training or mentoring in that new technology.”

Of course, it wasn’t just traditional office workers who had to make the change. Schools, colleges and universities all had to do likewise. Children and young adults no longer got to see their friends, unless it was through the medium of a computer screen.

Mobile operator Vodafone launched its ‘schools connected’ programme in November and is proud of the fact that all 350,000 data SIMs have now been ordered by more than 9000 schools and FE colleges across the UK.

“These SIMs are ready to be used by students during the current lockdown,” a spokesperson says. “We believe key to the programme’s success was a quick and easy ordering process (it took less than five minutes to order the data SIMs online) and giving schools and colleges the opportunity to distribute the connectivity to those they felt needed it most.”

The company is also joining the Department of Education’s Get Help with Technology programme to increase data allowances for disadvantaged children.

Simon Carter, director at RM Education, a supplier of technology and resources to the education sector, argues that before Covid-19, many schools were looking at cloud-based infrastructures but hadn’t fully made the leap.

“As a consequence, when speaking to our customers, the adoption of new technology and upskilling have proven to be the most significant challenges over the last few months,” he says. “Ironically, our research, conducted this time last year, suggested that many schools were unconvinced that technology had a big part to play in how they operated. All of that, of course, has since changed as a result of the pandemic and schools were forced to make the digital transformation journey almost overnight. Something schools planned to roll out over the next twelve months, was suddenly done in a week.”

Carter adds that with the help of the government’s Cloud for Schools scheme, the majority of schools have now got a robust remote learning platform – usually Google Classroom or Microsoft Teams – in place, which is the basis of all remote communication, live lessons and everything else in between. “The challenge now is to make sure every student and child has the device they need to learn and thrive,” he says.

A number of UK universities have been the target of cyber criminals over the past year, as hackers exploit the shift in working and learning. Carter argues that with many people going online for the first time, the risks are significant.

“In fact, the National Cyber Security Centre wrote to all schools in September warning them of an increase in ransomware attacks,” he continues. “It is imperative, therefore, that schools stay one step ahead of cyber-attacks – especially given that a ransomware attack can cost a school anywhere between £20k and £50k depending on both the incident and the size of the establishment. As a starting point, schools need to consider where their valuable data is stored and how it’s being protected. If the network is being accessed remotely, for instance, how is the network secured to ensure ‘bad actors’ can’t get in through the same route. It also means employing vigilance when it comes to preventing phishing attacks by educating staff and pupils. Alongside this, schools should be making sure that access controls are secured, recording policies and content is secure and private, students are keeping their laptops in a safe place day to day, and that messaging between students are monitored and even restricted when necessary.”

We’ve heard from the vendors, so now it’s time to ask an educational institution how it’s faring.

“Last time we had just fortuitously launched our new LMS (learning management system) but were working at speed to find out what it had to offer and there was variable skill and engagement of our teaching staff,” says Janet Legget-Jones, head of educational business development and support at the Royal College of Physicians (RCP).  “This time we were aware of all the different opportunities for virtual learning and had complete staff engagement. We have spent 2020 ensuring all education had been adapted for a virtual environment – a vast task as it is not just a case of putting a few slides up, but all group activities have to be adapted and changed.”

Legget-Jones adds that during the first work and study from home period, it felt as if the college’s staff was working so hard and relentlessly and fast to help doctors and provide information and teaching as quickly as possible on the new pandemic across the college. This time, she says, it’s “more hard work but seems more manageable” due to the processes the college has in place and the familiarity with using the virtual classrooms and the LMS.

“We have fast tracked the changes we were already planning over the next few years and have also identified new areas to work with – especially potentially international in the virtual spaces,” Legget-Jones continues. “The changes will not go away but we plan to have them alongside our existing face to face offering when it returns and, in fact, to offer a blended offering in some cases to maximise busy doctors’ time.”

Her colleague, Jonathan Jay, head of IT at RPC says the college is in a better position now for home working, although the tools haven’t necessarily changed. “Those, such as MS Teams have developed quickly. More important has been the enforced change in user mindset which otherwise would likely have taken several years to accomplish,” he says.

Now, it’s time for that all important question. We’ve adapted to three lockdowns and we know we have the tools we need. Does that mean we need to prepare for working like this indefinitely?

Parekh says the last 10 months have made employees and employers evaluate work/life balance and raised the question: do we really need to commute to the office to be able to work effectively? “What we do know is that the need for face-to-face and team interactions isn’t going away, so this must be always be taken into consideration,” she continues. “The current situation has forced companies to look at flexibility in the workplace, now there are much better collaborative tools available through the right IT investment. Naturally, getting the right balance will be key. During this latest lockdown companies are aware of the agility of working from home and are therefore better prepared. During the first lockdown parents were left to their own devices with their kids. This time round there are more collaborative tools, with a better schedule trying to mirror a school routine. The question is how do we keep younger children engaged and how can parents balance home-schooling with work? Schools are better prepared for another lockdown.”

In Jay’s opinion, “a shift to increased remote/home working will become the norm” but May isn’t convinced. “Personal interaction is a major part of human life and it can’t be replaced,” he argues. “While home working may be offered by more employers moving forward, I feel like productivity will suffer in many instances from continued social isolation, especially in departments where a consistent and open communication stream is essential.”

For Halliwell, “longer term, a hybrid ‘Operate from Anywhere’ model, with employees working from home, the office and elsewhere, is the future, but it will require organisations to invest in flexible, agile and secure networking technologies. Those that embrace these technologies will be best placed to rebound”. Don’t renew that train season ticket just yet.